Emotion Regulation is the Dialectical Behavioral Therapy module that teaches how emotions work. It provides skills to help manage emotions instead of being managed by them, reduce vulnerability to negative emotions, and build positive emotional experiences. It’s very difficult to use the other skills in the module if you’re struggling to understand what you’re feeling. Luckily, DBT provides the framework for learners just beginning to analyze their emotions.

Emotions can be either reactions to events in the environment or to things inside a person. These events and things are called Prompting Events. They prompt, or call forth the emotion. A person’s thoughts, behaviors and physical reactions prompt emotions. You might have an automatic feeling without thinking about it, like “I feel love when I see my cat.”

What triggers it or gets it going? Prompting events can be events happening in the present (an interaction with someone, losing something, physical illness, financial worries).  A prompting event might also be a memory, a thought, or even another feeling (you feel ashamed, and then feel angry about feeling ashamed, for example). In managing your emotions, it is important to be able to recognize prompting events.

2. Interpretation of an event or experience

Here’s a chart of some examples of how events lead to interpretations which lead to emotions:

When you experience emotions, there are changes in your body. Sometimes people have trouble sensing their body changes. To regulate your emotions you have to be pretty good at sensing what is going on in your body. If you have practiced shutting off our body sensations, this can be difficult. However it is a learned response and you can unlearn.

Emotions involve body changes such as tensing and relaxing muscles, changes in heart rate, breathing rate, skin temperature and color, increases and decreases in blood pressure, etc. The most important of these changes for you to be aware of are the facial changes: clenched jaw, tightened cheek and forehead muscles, tightened muscles around the eyes so that they widen or narrow, grinding teeth, loosening and tightening around the mouth.

Take note of your posture and facial expression. Are you hunched over, trying to make yourself smaller? Are you smiling? What are your hands doing? Are they open, willing hands or are you wringing them? These seemingly small changes communicate a lot about how you’re feeling.

Researchers now believe that changes in the facial muscles play an important part in causing emotions. That’s why Half-Smile works.

One of the most important functions of emotions is to communicate. In order to communicate something, an emotion has to be expressed. Sometimes, if you have not learned to express your emotions, you may think you are communicating but the other person isn’t getting it. This can cause misunderstandings.

Emotions are expressed by facial expressions, words and actions. Expressing emotions through behaviors can also cause problems, because different people interpret behaviors in different ways. 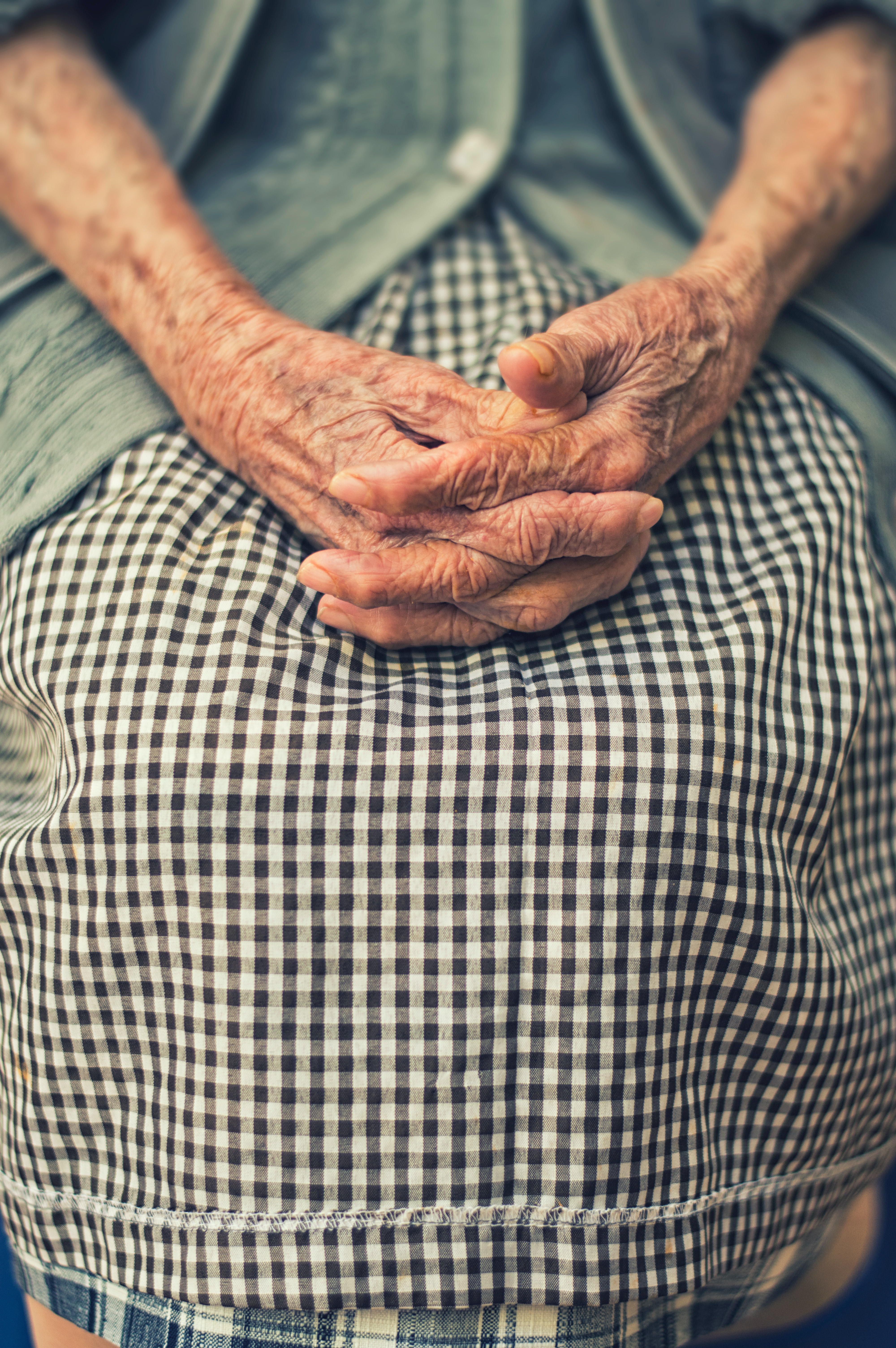 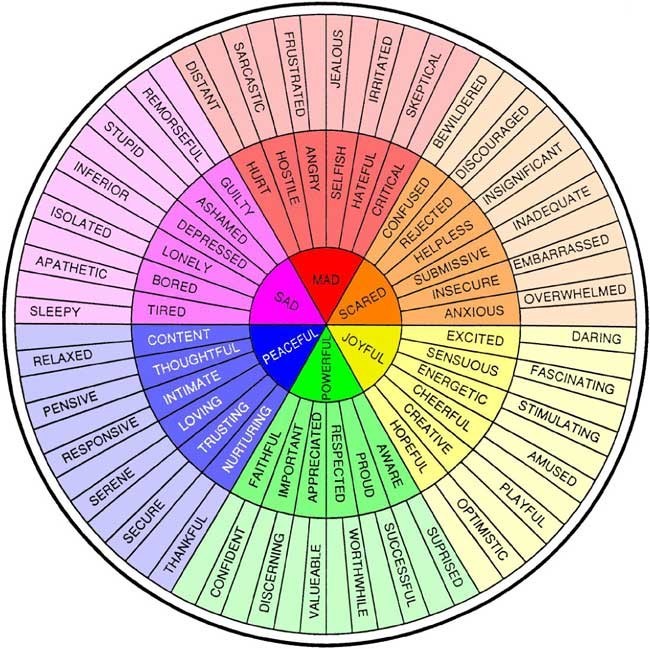 It can be difficult to name your emotion if you’re not used to examining your feelings. With practice, however, you can become an expert.

Some people also often feel ambivalence, or more than one emotion at the same time, like both anger and sadness when someone dies or goes away. This is totally natural.

Use this wheel to help you determine your primary (the innermost circle) and secondary emotions.

Emotions have after effects on our thoughts, our physical function and our behavior. Sometimes these effects can last quite a while. One after effect is that an emotion can keep triggering the same emotion over and over. This creates a cycle of suffering.

Brainstorm some prompting events, emotions, or action urges and fill out the following worksheet based on each one just for practice. Then use the worksheet next time you experience a strong emotion. Writing it down will not only help you understand, but also give you some distance from the situation that can allow you to reach Wise Mind. 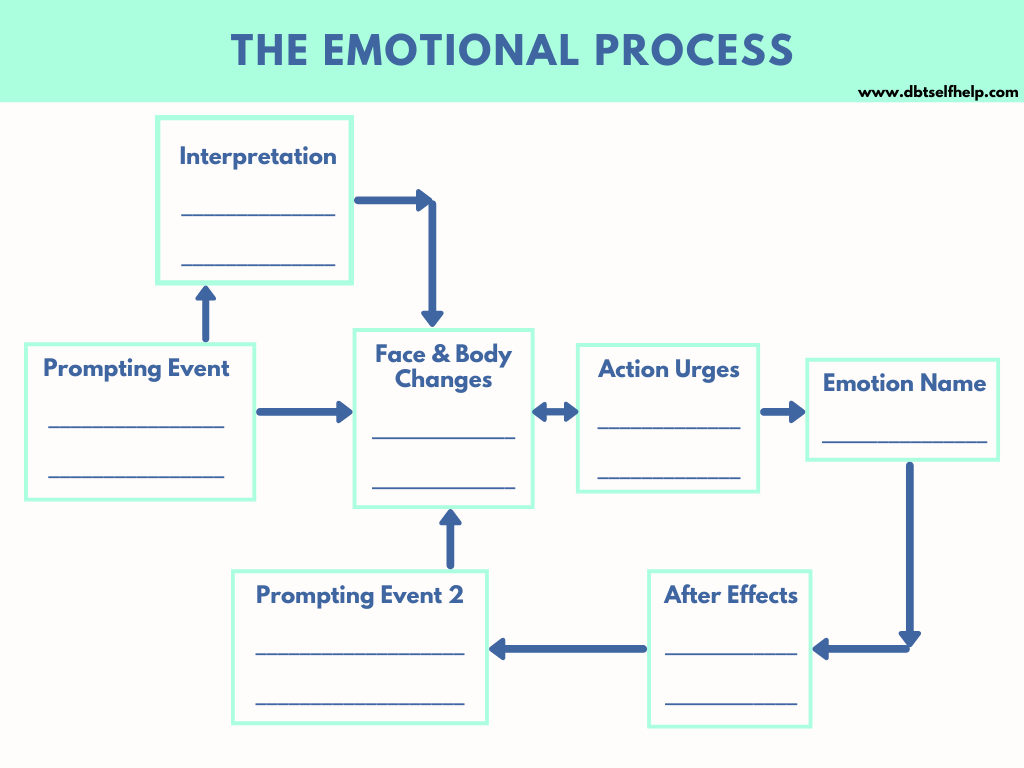 Here’s an example of the chart filled out: 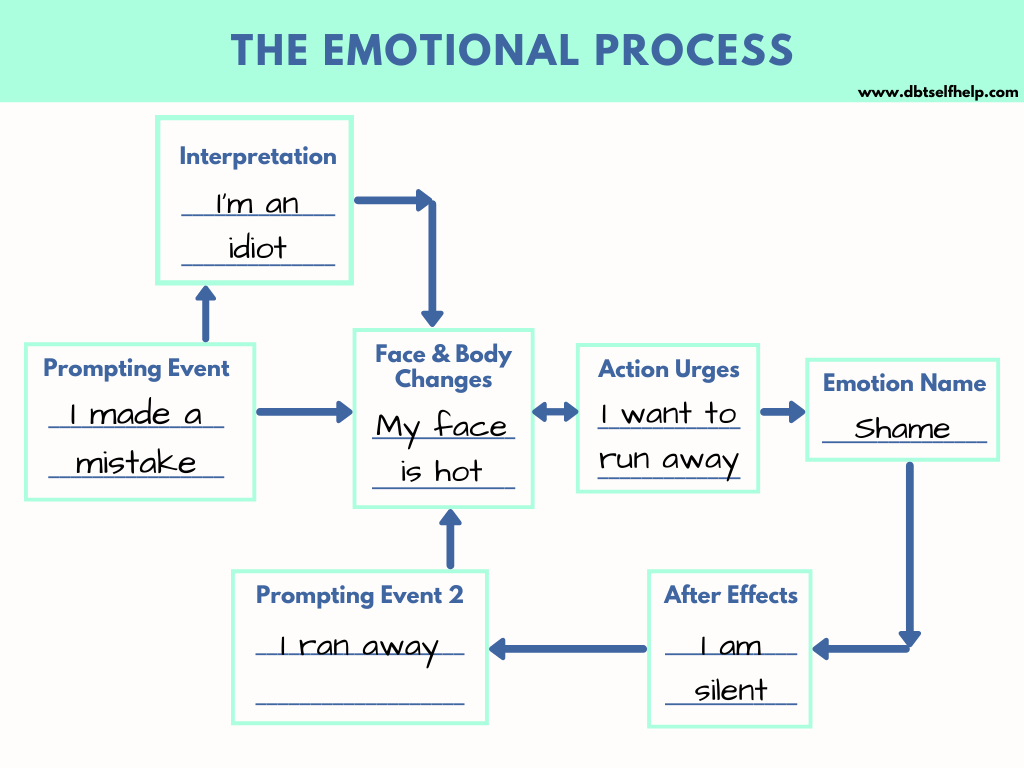 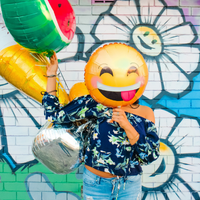 WHAT GOOD ARE EMOTIONS?

Emotions actually serve a purpose in our lives even if they go overboard sometimes. Read More> 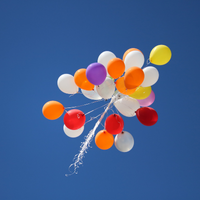 Emotions stick around only if we cling to them. Learn how to release them to reduce your suffering. Read More>

We aren't the only mental health resource out there. Check out these books, websites, social media accounts, and more for additional support. Read More

Making DBT skills second nature takes practice. Use these flashcards on their page, download your own to print out, or purchase our pre-made set from our shop. Read More

DBT has its own lingo which can be hard to understand for beginners. Visit our homemade DBT Encyclopedia to figure out what a term means. Read More

Mindfulness practice is key to DBT. You don't have to meditate in silence everyday, though. Try these Mindfulness exercises to guide you. Read More

Diary cards help track your emotions, urges, behaviors, and skill use. They help you see patterns. Learn how to use them and get samples. Read More